Unless you have been hiding in a cave, or just plain ignoring the political season as much as possible (not really a bad idea), you know that this Saturday the DNC Rules Committee is meeting to discuss Florida and Michigan. Almost a year ago, the Committee ruled that any state that moved their primary elections before February 5, other than the four chosen early primary states, would lose all their delegates. The Florida and Michigan state legislatures didn't think they were serious and decided to start a game of political chicken. The head of the Florida state party went so far as to threaten the DNC with law suits and protests if they enforced these rules.

The state legislatures wound up moving the primaries forward, Florida's legislature voted 118 to 0 on the bill and Michigan, at the behest of Carl Levin, voted to move theirs up in a 67 to 34 vote (at least here 1/3 of the Dems voted against it). In order to prevent a complete collapse of the primary schedule, with the risk of some states holding primaries as early as November or December of 2007, the rules committee gave them an ultimatum to move their primaries back or lose all their delegates.

As late as March 6, Sen. Clinton opposed re-votes in both states, with a blanket opposition to any Florida re-vote, "I don't think that there should be any do-over or any kind of a second run in Florida." It wasn't until she was significantly behind in pledged delegate count in mid-March that she began calling for re-votes in both states.

The first proposals by Florida were mail in primaries similar to what is held in Oregon. However, according to Florida state law, mail in elections are illegal for nominations like this. Another thorn in the re-vote plan was that the Floridian representatives to Congress were against the plan. By the time Clinton supported a Michigan re-vote, it was nearly too late to set one up, and her plan was to disenfranchise anyone that voted in the Republican primary, a restriction made impossible by the fact that voter rolls aren't taken at the primaries and such a system would then be completely an honor system. Due to this, the respective legislatures were unable to pass new plans.

That brings us forward to May 31. At the committee meeting, Clinton wants all 368 delegates seated. This would add about 192 delegates to her total, and, depending on how the Michigan uncommitted delegates are divided, 70 to 132 delegates to Obama's total (with a few also going to Edwards in Florida). At best, this would give her 122 delegates to cut into her 199 delegate deficit. More likely it would get her 60 delegates. This would bring the current delegate counts to 1974 for Clinton and 2051 or 2113 for Obama. The new goal line would be about 2210. With only 280 delegates remaining available, Clinton would still need 85% of them. Obama would only need 56 - 35%.

Personally, I don't think they should be seated fully. At the very least, all of the super delegates from these states need to have their delegate status removed. These are the ones like Carl Levin and the Florida state chairwoman who said the DNC "wouldn't dare" remove their delegates. These short-sighted representatives caused this mess in the first place and they should not be rewarded for this attempted party-cide by being given exactly what they wanted. Further, I don't think the full pledged delegation should be seated. At most, half should be seated; it wasn't the voters' fault (beyond choosing bad representatives) so removing all state delegates may have been too hasty a decision. Also, the 40% uncommitted should be given to Obama (according to exit polls, most of the uncommitted voters were Obama supporters).

Or, in some cases, repairs.

Finally, we have gotten somewhat caught up with our major outdoor projects. Of course, as with any home, there is always something more to do, but we now have breathing space.

Our most pressing repair, although it wasn't completely obvious, was a repair to the to the facing board behind the gutter on the back of our house: 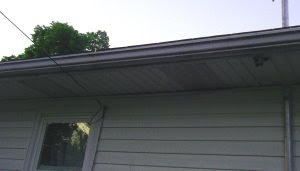 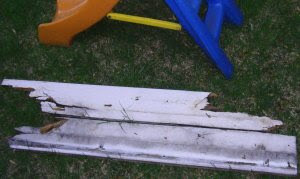 Needless to say, this showed the quality of work that has been so evident with the rest of the house... Now we have Kilz treated cedar wood up there. That ain't rotting for a hundred years or so...

Then there is the project that took three or so weekends. Last year my wife and I (mostly my wife) started a raised bed vegetable garden. We got months of tomatoes, peppers, and green beans out of those plants. To keep the ravenous squirrels away, we used two tactics: One, that probably did the most, was bribing the squirrels by putting the tomatoes that got insects, etc. under their tree (they were lazy) so that they wouldn't go across the yard to get fresh tomatoes. The other was a quickly assembled chicken wire fence wrapped around some metal posts: 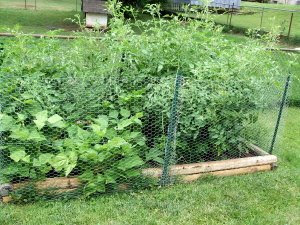 This worked alright, but was unsightly and always got in the way of the weed whacker. This year, not only did we expand the vegetable garden, but we went all out and made a real fence: 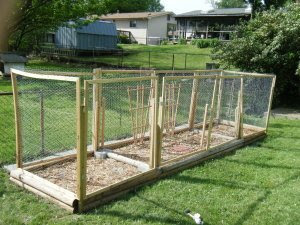 If the wood had been straighter, it would have been a quicker build, but now it is up and seems to be holding up to the insane weather we have been having the past several weeks.

I am still working on my MO Democratic Convention posts. If anyone knows a good way to post plain audio (mp3) files right into a blogger blog post, let me know.

No time for blogging this week

Or at least this past week, and much of this week. At least Blue Gal has given us all a free pass to play hooky this month! Instead I will be recovering from my birthday a week and a half ago, my son's birthday last Friday, our trip to the Missouri Democratic Convention, and recent home repairs. In the meantime, I will be gathering my thoughts on the convention, researching atrazine and memristors, finding a way to fight Charter's attempts to remove all of my internet privacy, and preparing to head off to the PHP|Architect conference up in Chicago next week. No rest for the weary, huh?

Oh, and a quick congrats to Hillary Clinton on her West Virginia win, netting her a gain of about 9-10 delegates.

After an incredibly idiotic, drawn out wait for Lake County Indiana to turn in it's results, we have some good final numbers. I guess that is sort of fitting after the long, drawn out race it is part of. Congratulations to Sen. Clinton on her Indiana win and to Sen. Obama on North Carolina.

With all this, of course, we need to take into account the super delegates and the target delegate count. With Obama's current delegate total, he is now within 181 delegates of the "magic number." Clinton is still 338 away. This means, according to CNN's undeclared super delegate count of 277, Obama is soundly inside of the number required to be handed the nomination.

This race is effectively over. Senator Clinton has run a very strong race. She has been a tough and tenacious opponent and I congratulate her. But now, more than ever, it is time for us to come together as a party in preparation for November. Obama very clearly articulated what we will be up against in the coming months. We must be unified to face the onslaught of lies and swift-boat attacks the Republican machine is guaranteed to throw against us. If we do not unify, they will use our divisions to try to drive us further apart. Our country and our world cannot be handed another four years of the policies of George W. Bush. As Obama said "We can't afford to give John McCain the chance to serve out George Bush's third term."

The power of conservation

Over the past few days I have been talking a lot about the presidential candidates' plans to cut fuel costs. Very clearly, I have supported Obama's "cut consumption" plans over Clinton's and McCain's "increase consumption but lower taxes a couple cents" plans. I felt that some of the research I did for comments deserved a little bit more attention.

As of 2006, Americans were using over 20 million barrels of oil per day. This is three times more than any other country in the world - China, the most populous nation and second biggest oil consumer, uses just over 7 million. Looked at a little differently, the average American uses about 25 barrels of oil per year, the average Chinese person uses about 2; Japan, the next most consuming nation and also a highly developed society, uses about 15 barrels per person.

What does this mean when it comes to oil? It means that America is one of the best countries to focus on conserving oil. If Americans used just 10% less oil a year, that would make an incredible dent in consumption. It wouldn't completely fix the problem, but as a computer programmer, you learn to optimize starting with the largest bottleneck.

What would 2.5 barrels of oil entail? One barrel of oil holds 42 gallons of crude. Out of that, depending on the refining efficiency, about 19 to 20 gallons of gasoline can be made, along with a number of other by-products. For just gas, 2.5 barrels is, on average, a bit more than 1,200 miles of driving in a year. If fuel economy is raised to 35 mpg as called for in the recent bill, that alone would be a fuel savings of about 30% over an average year, about 143 gallons - more than 7 barrels of oil and more than $500 (not including what is saved in lower demand). Even more can be saved by using, when available, public mass transit. Or by purchasing locally grown food (shipping food from China and Central America uses quite a bit of fuel).

Or even just by recycling and buying recycled plastics. New plastic products, worldwide, consume about 1 billion barrels of oil a year (just in the plastics themselves, this doesn't include energy to produce). Recycling could cut this significantly (producers, PLEASE mark your products for this...).

It doesn't matter which candidate is the Democratic nominee

This woman had better be the VP nom.

Congrats to the Momocrats on a great interview (full disclosure, my wife wrote the initial response Obama is responding to). I join them in asking the other candidates to respond to these questions as well.