Since last week, political violence reacting against the now law health care reform has been escalating to dangerous levels. This past weekend, bricks were thrown through office windows for Congresswomen Slaughter(NY) and Giffords (AZ) and DNC offices in New York and Kansas. In DC, racial and homophobic slurs were hurled at Congressmen as they attempted to enter the Capitol. This week, death threats have become endemic. Gas soaked torn up flags, unknown, possibly hazardous white powders and other things have been mailed to numerous Congresspeople.

Sadly, it didn't start last week; it didn't even start with health care reform. In 2008, Sen. John McCain and Sarah Palin ran on a campaign that boiled down to "hate Obama." They called him a terrorist, or friend of terrorists. They call him or anyone who supported him un-American and evil. This rhetoric lead some people to cry out "Kill him" at a Palin rally. But it didn't even start there: Rove and Bush, Reagan, Nixon, McCarthy all have attempted to turn their political opponents into something other than American, other than human. This dehumanization creates an excuse for the more violent among us to act on their tendencies. It is much easier to harm someone that you believe is "other" than it is to harm your fellow citizens.

Now, Republican Congressmen are trying to play both sides. John McCain has said "The language we should be using is the language we are using." House Minority Leader Boehner said "But, as I've said, violence and threats are unacceptable" but "Washington Democrats just aren't listening." Minority Whip Cantor, in a fit of total hypocrisy, claimed "Democrats are fanning the flames [of violence]."

Many on the right also attempt to create false equivalencies. They claim the rhetoric used against Bush was just as bad, or that violence from extremists on the far left is the same. The thing they don't mention is that no ranking Democrat ever endorsed such statements or acts. The anarchists Glenn Beck pointed to yesterday don't have conventions led by Rep. Pelosi or Rep. Weiner. Code Pink was as, if not more likely to shout down a Democratic event than a Republican one.

The mainstream news media itself is complicit. They treat a report on a bullet hitting Rep. Cantor's Richmond office as violence from the left, even hours after police report it was a random bullet fired into the air, possibly from miles away. They'll report on phone calls calling a Republican representative racist as comparable to phone calls threatening the life of Democratic representatives and their children. They compare fringe rhetoric from organizations like Code Pink to direct threats from Tea Party organizations that have been embraced by Republican leadership. These are not equivalent.

Political sentiment doesn't really fall on a strait continuum; if you go far enough left, the rhetoric is no different from the far right. To demonstrate this, I've used a circle instead of the usual line: 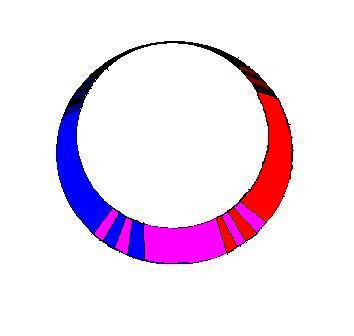 In a normal climate, even to a point during the Bush administration the political spectrum looked like this. The majority of people are moderates (bottom) who flow back and forth between the parties. On the left and the right are the major parties bases. And at the extreme are Anarchists (top). The colors demonstrate party affiliation, left, mostly Democratic being blue and right, mostly Republican, being red with the moderate independents purple and anarchic independents in black. You'll usually find some overlap at the edge, on the left being represented by people like Michael Moore and Dennis Kucinich and on the right by Ron Paul and Ayn Rand. These people aren't generally embraced by the mainstream of the parties and so stay on the fringe.

This balance has shifted significantly in the past decade, especially since Obama's election. Now the spectrum looks more like this: 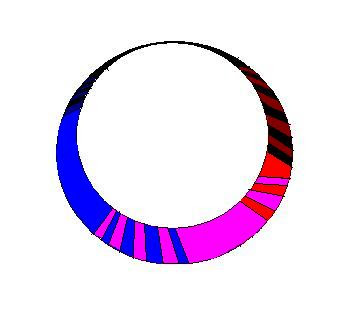 Republicans have abandoned the center moderates (i.e. Sens. Specter, Snowe and Collins) and embraced their far fringes (i.e. Rep. Bachmann, Glenn Beck). Even those typically seen as far right are being challenged as not "pure" enough (such as Ron Paul being primaried by those further right). Some normally considered solid conservatives are being dropped from conservative organizations (David Frum ousted from American Enterprise Institute).

This can not continue. If this nation is going to hold together, the violence has to stop, the threats need to end, and the Republican party has to stop embracing the fear and hatred they have created. Their decades of creating an "us" vs. "them" environment and demonizing their opponents have created this monster and they must kill it before it consumes them.