Some of you may be watching the new Rachel Maddow show (and if you aren't, start). If you were last week, you may have seen a story about Barack Obama repeating the word "pie" twenty times in about two minutes. I'm happy to say, when he came to St. Louis Saturday, he shared that same story with all 100,000 of us. It actually is a really good story for all it's randomness at the beginning. Below is a transcript and the video (story is about 7 minutes in). See Momocrats for the other videos and more photos and impressions.

I was in Ohio last week and I was traveling with the governor there, Ted Strickland. We were on a bus tour talking about jobs. And we were working hard so, we got a little hungry. Decided we needed an afternoon snack. So I decided I needed some pie. Some of you may like cake, I like pie. Turns out Strickland likes pie too.

So we went into this little town, Georgetown Ohio, and found out where the best pie place was. It was this local diner. We went into the diner.

So we order our pie and the people who are serving us, they want to take a picture with me because they say, "Our boss, he is a die hard Republican. So we just want to poke him a bit by taking this picture."

So while we're standing there cheezing and grinning, the owner walks in, with our pie. And I said, "How do you do sir? I understand you are a die hard Republican."

He said "Not so good." He said "My customers can't afford to eat out right now."

I said, "Sir, who's been running the economy for the last eight years?"

He scratched his head and said, "I guess the Republicans have."

I said, "Sir, if you keep on hitting your head against a wall and it starts to hurt, do you decide at some point to stop?"

He said "You make a good point."

I said, "Why don't you go ahead and try voting Democratic this year. We can't do any worse than these other folks have been doing now."

Lets all stop hitting our head on the wall. 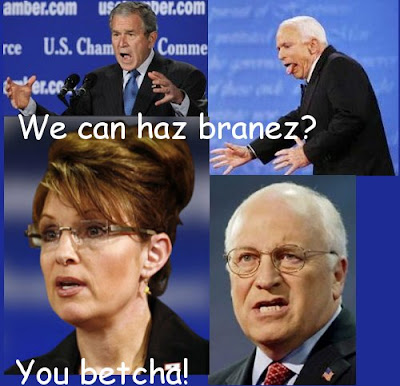 In this recent economic downturn, people from all sides are pointing fingers and trying to place the blame on one another. This is the first of a series of posts in which I will try to dispel some of the myths being spread.

The most common theme you hear when it comes to the housing market is "people bought more house than they could afford." While this is true in some cases, more often it only became true three to five years after the home was purchased.

Back around 2003-2004 we were just beginning a recovery from the twin market downturn caused by 9-11 and the tech bubble burst. Jobs were slowly being created, interest rates were at all time lows and many were expecting the economy to really grow. Because of this, more people saw that they were finally able to get into the housing market. This caused house prices to grow which allowed people already in a house to upgrade to a new house. This was the start of the housing market boom.

What people didn't realize was that the economic growth they were seeing in the markets was a shallow gain. While average wages were going up, they weren't matching inflation. What's more is that the average number was skewed by a large increase in income for the top 1% with little to no gains for the other 99% of us (see charts below). At the same time, mortgage brokers and other lenders (who we will discuss more thoroughly later) saw the potential for large profits via new mortgaging schemes now dubbed "sub-prime." This led them to encourage clients that could qualify for standard mortgages to instead apply for adjustable rate or other balloon mortgages. 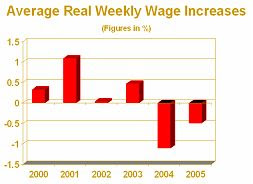 This is why I say most people trapped in this mess could afford the house they bought at the time. However, when inflation went up (not only food prices, health insurance costs have increased 20-30% annually in many cases; an average of 6%) but their wages didn't, they were put in tighter and tighter circumstances. In the very early days of the current crisis (circa 2005-6) some people were still able to refinance or sell their way out. But some people hit a more severe hardship. Many people got to the point where they were living paycheck to paycheck. If they lost their employment for even a month, they wouldn't be able to pay the mortgage. If they had any sort of medical emergency, they wouldn't be able to pay the mortgage. These people began going into default.

By late 2006 and throughout 2007, the housing boom started really slowing. Job growth had slowed or at times gone negative. Federal interest rates had been raised from their 2003 lows of 1% back up to a more reasonable 3%+. At the same time, personal property taxes were being reset to the new home values. In many cases this caused a doubling of those taxes. People could no longer refinance their homes. Fewer people could buy so housing prices began to slump and selling the house was no longer a way out. Wages that had been stagnant (or negative) for three or four years were no longer able to afford the mortgage and the rapidly increasing cost of getting to work. The people who in 2003 could afford their house were rapidly getting buried under increasing piles of debt. This trap many home owners fell into is what began the popping of the sub-prime bubble.

So I ask you, is it your fault that corporations have enjoyed their multi-million dollar golden parachutes while the employees working 60 hours a week to make ends meet get nothing? Is it their fault that insurance costs grow by double digit percentages while coverage steadily drops?

There were some people who bought beyond their means, don't get me wrong. If you make $30,000 a year, you probably can't afford a $300,000 house. If you are told you can live in a house for three years without paying anything (what some of the balloon mortgage plans promised), it is probably too good to be true and you shouldn't sign up for it. But I can't put the blame on a working family who couldn't see that their earnings would be the same four years down the line but their expenses would have grown by double digits. I don't blame the public school graduate who can't understand the ins and outs of mortgages that even the Harvard educated accountants who invented them barely understand.