I have finally gotten through the FISA reform bill. I am not a lawyer, so any of my readings of this legislation may not be completely accurate. There is also the problem that many of the clauses refer back to the original FISA or other laws, which I don't have a copy of. What follows is my best attempt to translate it to somewhat human readable form.

Non-US citizens outside of the US

Certifications (similar to warrants, but with lighter requirements):

US Citizens outside the US

In an interview today with the Washington Times, one of McCain's top economic advisors, Phil Gramm (of Enron loophole and mortgage meltdown fame), said that Americans facing hardships due to the (near?) recession we are facing are "nation of whiners." The article goes on, "'We've never been more dominant; we've never had more natural advantages than we have today,' he said. 'We have benefited greatly' from the globalization of the economy in the last 30 years."

For some sectors, that may be true. Unfortunately, a larger portion of our workers are in sectors that have not grown and more often shrunk. You have only to look at Michigan (although the car companies themselves are more to blame than globalization), Pennsylvania and Ohio. You have only to look at our now non-existent textile manufacturing industry, or most other manufacturing industries for that matter.

Gramm's pay as a UBS vice-chairman may have only gone up over the past six years as he got more and more borrower safeguards removed, but the average American's wages have barely kept up with inflation - in many cases they have lagged behind. For the first time in at least 35 years (google finance didn't go back any further) the S&P is on target to be lower at the end of a president's term than it was at the beginning (even during the recessions of the Carter and Reagan administrations it closed higher).

This is the type of person John "I still need to be educated [on economics]" McCain is choosing to do that educating. This is why McCain's solution to the mortgage crisis is "get over it." Advisors like Phil "Enron" Gramm are the reason McCain thinks an eighteen cent tax holiday for a couple months won't just go right into gas company pocketbooks.

Get Out of Jail Free 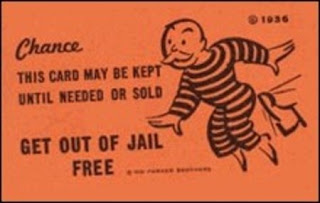 Well, it's happened. This afternoon around 3 CDT, the Senate voted to approve the FISA amendment bill with no amendments. Bush was last seen doing his happy dance in the Rose Garden with the AT&T exec that has been buggering him for the past 8 years. John McCain was seen far away from DC hoping no one pays attention to whether or not he supported it. And Sen. Obama voted in favor of the final bill...

Obama did, however, vote in favor of every amendment that would have stripped telecom immunity. Unfortunately, there were, on average, 15-17 Democratic senators willing to fight for the telecommunication companies -- among them my own Sen. McCaskill... According to Sen. Obama, the reason he voted in favor of the final bill is, in part, that it sets up Congressional oversight of any eavesdropping program via an inspector general -- something that should have been set in the original bill.

Oddly, contrary to what happened almost 5 months ago or two weeks ago, Sen. Clinton voted against the final bill. Kudos to her for finally taking a stand on this issue.

I will update those vote tallies with the links to the actual votes so you can see where your representative voted on each thing when the Senate posts it.

Now that the Democratic nomination has wound down and Obama has emerged as the victor, the main stream media, driven by the hard right (especially the self avowed McCain "surrogate" Faux News) have started attacking Obama's positions. The most common attacks are the blatant lies - the "Obama is a secret Muslim" and "Obama says high gas prices are a good thing." What is more insidious, though, are the attempts to portray Obama's long held positions as "flip-flops."

Julie over at Momocrats has a great series of posts (starting here) addressing a few key issues. As she points out: on the death penalty he has consistently been against killing innocents, but not against capital punishment in general; on gun control - "I think it's important for us to recognize that we've got a tradition of . . . gun ownership . . . We can have reasonable, thoughtful gun control measure that I think respect the Second Amendment."; FISA I will address later in this post.

Other attacks like this include NAFTA - his position has been that we need to renegotiate NAFTA, not drop it completely. His problem with NAFTA has been that there are no environmental protections and no worker protections. This allows manufacturing jobs that paid well and were union jobs here in America to be sent to Mexico and Canada where the workers can be paid less and there are fewer environmental protections. He wants to fix these issues; he does not want to unilaterally drop out.

Then there is Iraq. Obama has, since 2003, been against Iraq. But now you are seeing people attack him saying he doesn't intend to leave and in the same breath attack him for being a "cut and run Democrat." They can't have it both ways. Obama's stance has been "We have to be more careful getting out than we were careless getting in." This means that while he intends to pull most of our troops out in 12-18 months, he is not going to do something stupid that leaves us in a worse position than we already are in.

Just this past weekend we had yet another instance of this. General Wesley Clark said "Well, I don’t think riding in a fighter plane and getting shot down is a qualification to be president." On its surface, it's true. However, McCain did serve in the military, achieving the rank of captain. This is a record of service that, as Obama has said for months, deserves our recognition. He has also consistently, even through the primary campaign, been against personal, ad hominem attacks. Thus, when he rejected General Clark's attack, he was not flip-flopping or throwing Clark under the bus, he was staying consistent with his message of bringing politics out of the gutter.

The last of these I want to focus on is the FISA legislation. In general, I am against these reforms. However, I have not read the legislation myself and I don't know all of the reforms it will be implementing. The one that I am most strongly against is the telecom immunity clause that will ensure no one is held responsible for completely ignoring the Constitution during Bush's warrantless wiretapping program. When this came up for vote a few months ago, Obama voted against cloture and co-sponsored an amendment with Sen. Dodd to strip the immunity clause. It has come back up for vote in the Senate and this time Obama did not vote on the cloture vote (neither did McCain or Clinton). He has, however said he will continue to push to remove the immunity. Without having researched this bill better, I can't make a complete judgment on his general support of the bill. As far as whether he has changed his position, that is harder to say; he still is fighting against the immunity, but it appears he has weakened his position on the bill at large.

Now all of this does not mean he hasn't changed position on things. The most talked about change has been his stance on public financing in his campaign. Back in 2007, he did say that as long as his Republican counterpart chose to accept public financing, so would he. This clearly is not happening. To explain this, he has said that with 1.7 million donors nationwide, his campaign is being financed by the public, but that ignores some of the other catches tied in with federal public financing. Personally, I am mixed on this. As an idealist, I would like for the public financing system to work and allow good campaigns. However, the other side is best summed up in a cartoon BAC posted a week ago: 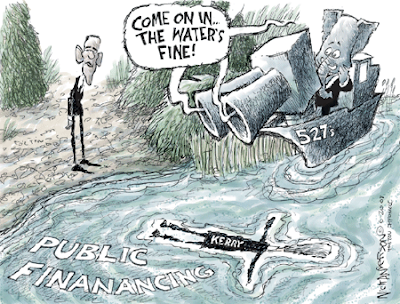 There is also the issue of Israel. Throughout his career he has remained fairly neutral on this. However, after securing the nomination he spoke before AIPAC and came down very strongly pro-Israel. This really disappointed me. It weakens his ability to be a fair arbiter of any peace deal between Israel and Palestine. As of yet, I have not heard him address the issues raised in this speech.

I think Julie's final assessment is very accurate. Obama's positions are much more nuanced than a 10 second sound bite. This is something that draws me to him because it breaks away from the "with us or against us" mentality of the past eight years. But it is much harder to convey to the wider public and can be has been used against him. What should be the MSM's job, conveying the facts of the issues, has now fallen to us, the bloggers and grass roots activists.